The way people are giving has changed over the years. It used to be that people would send letters with checks to organizations. Now a lot of giving is done online via platforms like gofundme or through social media channels like Facebook. Along with that, the demographics of these giverz are changing. Boomers are starting to retire, Gen X and Y are advancing in age and GenZ is now entering the workforce.

A study by the Blackbaud institute indicates that people in Generation Z (also known as “post-Millennials,” born in the late 1990s to early 2010s) represent only two percent of the giving pie, but are increasing in influence. For this rising generation, giving is characterized by additional trends: online and mobile engagement, social media use, and non-monetary contributions such as volunteering, activism, and spreading the word (Blackbaud, 2018).

As the sole designer on this project, I had 8 weeks to figure out a way to tackle this problem, but first I had to be clear on what the problem was.

I wanted to test the validity of the research I had gathered so I created a survey that had a few demographic questions like age and what industry they worked in. The main questions That I wanted to answer in the survey were:

“Have you donated to a charitable organization in the last 6-12 months?”

In total, I received 17 survey responses, and these were the reasons why people decided whether or not to donate to organizations.

The reasons people chose to give were:

The reasons people chose not to give were:

I came up with 10 interview questions to be asked in face-to-face/Zoom interviews:

After Synthesizing the data I was able to learn that:

TRUST – Participants wanted a way to know that the organization that they were donating towards was legitimate. I heard a few stories of people who had been scammed.

SOCIAL MEDIA – 100% of participants were discovering organizations through their social media feeds.

MONEY – Participants felt that donating money would be the easiest way to help out organizations in need. At the same time though, they did not have the funds to donate as much as they would like to.

Based on my research and user feedback, GenZ finds it challenging to find reputable organizations to engage with. Uninformed GiverZ needs a tool to navigate, educate, and update their giving decisions in order to stay aware of the impact of their giving.

How might we increase Gen Z’s engagement with nonprofit organizations?

This turned out to be two different problems

How might we make it easier for Genz to discover local nonprofit organizations?

How might we increase engagement with local nonprofit organizations?

I chose to focus mainly on the first question.

My target audience is Genz but more broadly it’s the youth that will come after Genz. I want to make the act of engaging with on profits something that is enjoyable so that more of them will choose to interact with nonprofits. I created a persona that embodied these characteristics.

In order to get a sense of the landscape of competitions, I conducted a competitive analysis of similar products on the market. This gave me a fuller picture of what products are out there solving this problem or problems that are similar. 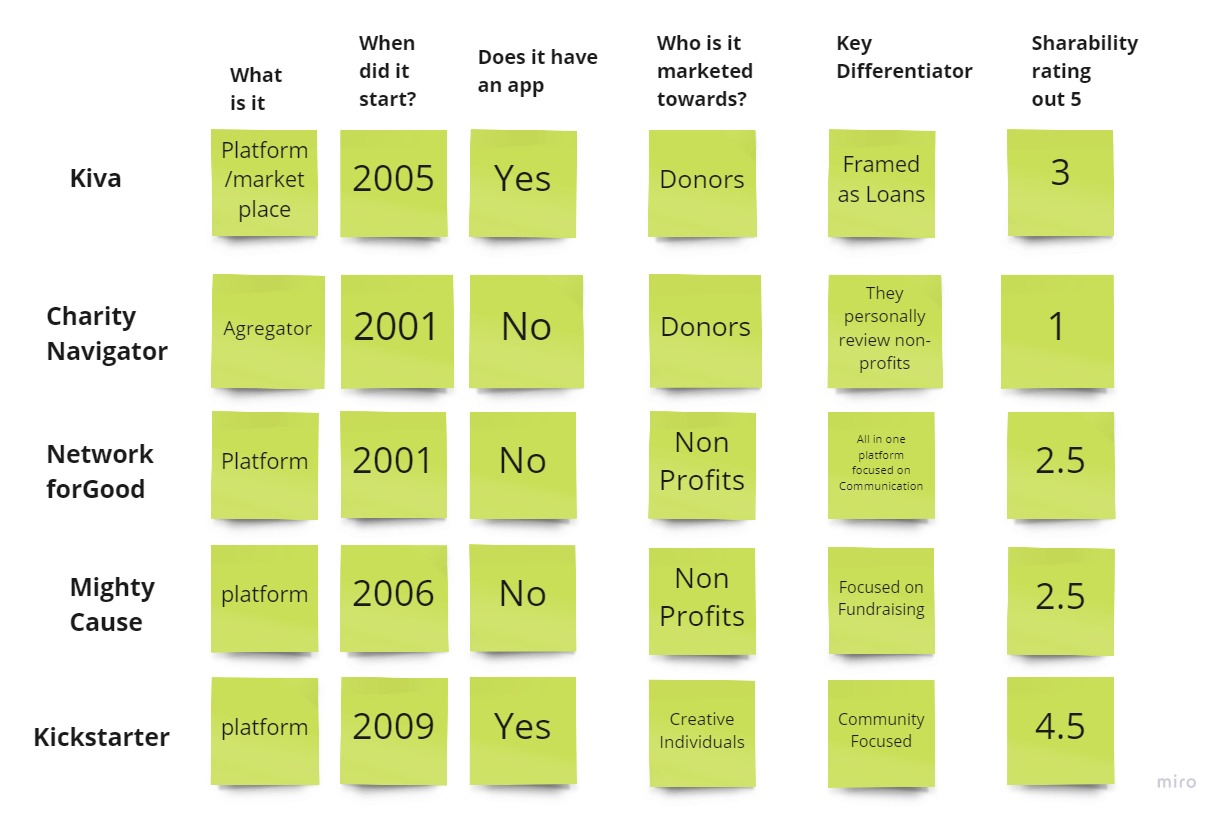 Based on the competitor analysis, there was an opportunity for a mobile-first solution. One that would be sharable and convenient for the user.

In my process of ideating possible solutions, I had a lot of influence from the finance space because I was initially thinking of ways to make donating easier for Genz users.

I was inspired by financial institutions like Chime and Robinhood. Chime has a “round-up” feature that lets its users save money by transferring change to their savings account. I thought that feature could be used for this app.

Robinhood inspired me because of the way that it is designed for investing newbies. The user interface makes investing very straightforward. I wanted my app to be one that used the round-up feature but was easy to navigate when it comes to finding organizations to donate to.

I also took into account how apps fund themselves and I looked into what mobile games makers like Zynga were doing. I thought incorporating ads in the app in a way where it would help the user raise more money to donate would be an interesting model. GenZ is already familiar with the mental model of “watching ads for money”.

I created a user scenario of the current situation users are in and what I would hope the addition of my app would create for users.

After that, I created a user flow that laid out the ideal process for a user coming into the app.

Next, I created a Crazy 8 of how I wanted the layout of the app to look.

I then created a low/mid-fidelity prototype of what the app would look like.

Later in the process, I realized that I was supposed to have created a sitemap of the navigation hierarchy before creating the screens. I went back and documented the hierarchy that I had come up with while creating the prototype. 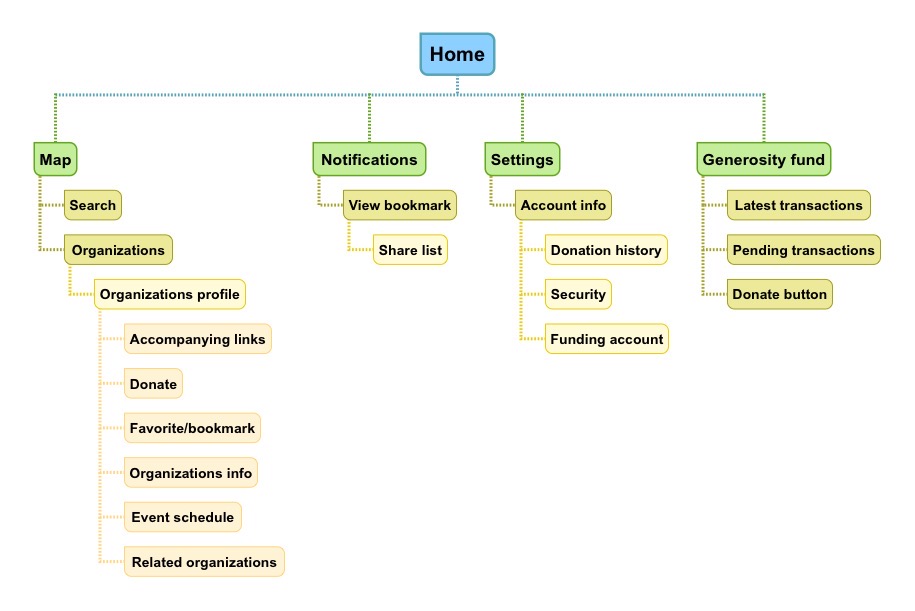 Network effects refer to the phenomenon where a product or service gains additional value as more people use it. Ultimately this would be a great outcome for the project. I considered the different stakeholders for the app. The Users, the organizations, the business that would purchase ad space. If I could create an app that attracted a lot of GenZ then more Organizations would want to be a part of the app and if more eyeballs are on the app then more ad sponsors would be attracted which gives the users more opportunity to “raise money” by watching ads that create a virtuous cycle.

In an interview I did with a classmate who had experience in the nonprofit sector I learned that I was too focused on the idea of getting users to pay money which is not bad, granted this is the focus of the project. However, the real opportunity that my app creates is the opportunity for organizations to create and engage a younger audience.

The reality is that for nonprofits their average donor is 64 years old and a majority of nonprofits get their money from grants and trust funds. If you were to compare the size of a donation from a group of Z users versus a group of trust funds, the trust funds would generally be larger. So in the grand scheme of things Giverz’s focus should be more on creating opportunities for nonprofits to nurture and engage younger generations in charitable giving.

These are definitely areas I would like to focus on if I were to have more time.

Admittedly I did not spend as much time on the visual design of the app since graphic design is not necessarily a strength of mine. Knowing this I decided to use a minimalist design aesthetic

I wanted the logo to also be something simple that basically explained what the app was about.

Below are some of the apps  I used for inspiration while creating the prototype.

For my first test, I didn’t have any specific questions prepared. I wanted to see how intuitive the interface was at the start so I let users explore and asked questions about areas they had trouble with during the session.  I was able to hold 4 usability tests.

One positive from the first session was that  100% of the 4 users I tested found the ad section favorable. One of the user’s said:

“I liked the watching ads to donate because that’s easy peasy, even if it’s a couple of cents. Like, if I’m eating like, instead of being on Netflix and I just have to watch a couple of videos to add $0.50 to my account, I would do it because it’s like, spare time. I don’t know. There’s other apps, too that are like,… watch this app and you get ten more points. People do that. So why wouldn’t they do it to benefit a human?”

An area that I wanted to improve was making the swiping feature on the organization profile more intuitive. 100% of the users needed a little prompting before understanding that the profile would swipe.

In my second round of interviews, I prepared more targeted task questions. questions.

Ideally, my next steps would be to look into ways of solving the engagement piece of this puzzle. This project was primarily focused on the user-facing side of the app but more thoughtful consideration would need to be made for the organization-facing side of the app. Also I’d like to build an MVP.

Click here for the full Medium Article Client : Walmart Role: UX Designer Scope: 8 weeks Problem Statement : How might we make Grocery Shopping fit into people’s schedules? I looked into a few different companies to get inspiration on how best to solve this problem. I chose two of my three best ideas that…